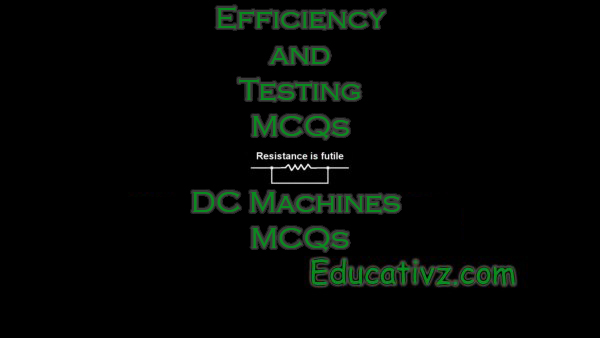 1. The efficiency of the DC motor at maximum power will be ___________________
a) 100%
b) Around 90%
c) Anywhere between 75% and 90%
d) Less than 50%
Answer: d
Explanation: For getting maximum power, derivative of power with respect to current is equal to 0. This is practically impossible to achieve as, current required is much more than its normal rated value. Large heat will be produced in a machine and efficiency of motor will be less than 50 %.

2. The hysteresis loss in a DC machine least depends on _____________
a) Frequency of magnetic reversals
b) Maximum value of flux density
c) Volume and grade of iron
d) Rate of flow of ventilating air
Answer: d
Explanation: As iron core of the armature is rotating in magnetic field, some losses occurs in the core which is called core losses. These losses are categorized as Hysteresis loss and Eddy current loss. They depend on all quantities listed above.

3. Which of the following is not the effect of iron loss?
a) Loss of efficiency
b) Excessive heating of core
c) Increase in terminal voltage
d) Rise in temperature of ventilating air
Answer: c
Explanation: Iron loss causes excessive heat production in the core of a machine, which will rise the temperature of ventilating air, as it acts as heat exchanger. Thus, terminal voltage rise is not an effect of any loss.

4. Which of the following loss is likely to have highest proportion at rated load of the DC generator?
a) Hysteresis loss
b) Field copper loss
c) Armature copper loss
d) Eddy current loss
Answer: c
Explanation: Armature copper loss is directly proportional to the square of armature current multiplied by the armature resistance and also the series field resistance if present any. As, at loaded condition armature current is very high.

7. Which of the following loss/losses in a DC generator is dissipated in the form of heat?
a) Mechanical loss
b) Core loss
c) Copper loss
d) Mechanical, Copper and Core
Answer: d
Explanation: All the losses listed above dissipate the heat. This, dissipated heat due to various losses results in increasing the temperature of ventilating air. These losses are dangerous in long running of a machine, can reduce efficiency also.

8. Which of the following losses are significantly reduced by laminating the core of a DC generator?
a) Hysteresis losses
b) Eddy current losses
c) Copper losses
d) Windage losses
Answer: b
Explanation: Hysteresis losses can be minimized by using material with lower hysteresis coefficient. Eddy current losses can be minimized by using laminated sheets of core structed together. To reduce other losses, current should be minimized, can’t be reduced as it also has lower limit.

3. In a DC generator, the iron losses mainly take place in ____________
a) Yoke
b) Commutator
c) Armature conductors
d) Armature rotor
Answer: d
Explanation: Iron losses take place in the form of hysteresis loss and eddy current loss. These losses are maximum, where field is maximum. Thus, when armature is rotated in presence of flux we get maximum iron loss.

4. If DC generators are located near load centres, which losses can be minimised?
a) Iron losses
b) Eddy current losses
c) Line losses
d) Corona losses
Answer: c
Explanation: Line losses occur in long transmission lines while sending output power to the loading stations. Thus, by locating the generators near loading stations losses occurring due transmission line can be eliminated.

6. Why retardation test is carried on DC machine?
a) To find stray losses
b) To find eddy current losses
c) To find field copper losses
d) To find windage losses
Answer: a
Explanation: This test is generally employed to shunt generators and shunt motors. From this method we can get stray losses of a machine. Thus, if armature and shunt copper losses at any given load current are known then efficiency of a DC machine can be easily estimated.

6. What is the purpose of performing retardation test after Swinburne’s test?
a) To find stray load loss
b) To find variable losses
c) To separate out windage and friction losses
d) To find shunt field losses
Answer: c
Explanation: While performing Swinburne’s test we get addition of all losses. So, if we want to treat each loss individually, one needs to separate them. Retardation test is thus used by disconnecting both armature and field of the running motor.

7. Efficiency calculated by Swinburne’s test is _____________
a) Exactly equal
b) Over-estimated
c) Under-estimated
d) Depends on the manual errors
Answer: b
Explanation: The stray-load loss cannot be determined by this test and hence efficiency is over-estimated. Correction can be applied after assuming the stray-load loss to be half the no-load loss, which is done generally. Also, temperature may effect on resistance value which is not considered in this test.

8. Which of the following is not a disadvantage of a Swinburne’s test?
a) The stray-load losses can’t be determined by this test
b) Steady temperature rise can’t be determined
c) Does not give results about satisfactory commutation
d) Machine gets damaged
Answer: d
Explanation: For increasing life and durability of a machine we carry out such tests. But stray load losses, steady temperature rise is not determined by this method. Also, results about satisfactory commutation are not given by this method.

2. Hopkinson’s test requires ____________
a) One DC machine on which test is carried out
b) Two different DC machines
c) Two identical DC machines
d) Can be worked with one or two machines
Answer: c
Explanation: This is a regenerative test in which two identical dc shunt machines are coupled mechanically and tested simultaneously. One of the machines is used as a motor driving while the other one acts as a generator which supplies electric power to motor.

7. For carrying out load test on Hopkinson’s test setup _________________
a) Actual load is needed
b) By changing field currents in two machines load can be changed
c) Can’t carry out
d) By changing the armature current test is carried out
Answer: b
Explanation: There is no need to arrange for actual load (loading resistors) which apart from the cost of energy consumed, would be prohibitive in size for large-size machines. By merely adjusting the field currents of the two machines, the load can be easily changed and a load test conducted over the complete load range in a short time.

9. Hopkinson’s test is suitable for ______________
a) Small machines only
b) Small and medium machines
c) All machines
d) Only large machines
Answer: d
Explanation: A large variation of field currents is required for small machines, the full-load set speed is usually higher than the rated speed and the speed varies with load. The full load in small machines cannot obtained by cutting out all the external resistances present in the generator field. Sufficient reduction in the motor field current is necessary to achieve full-load conditions resulting in speeds greater than the rated value.