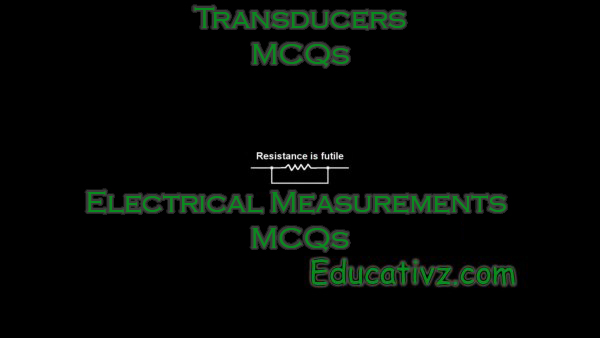 9. Load cell is sensitive to minute strains.
a) True
b) False
Answer: a
Explanation: A load cell responds to very minute variation in the value of strain. It is sensitive to high values of the load.

10. Thermistor has low resistance.
a) True
b) False
Answer: b
Explanation: Thermistor generally has a very high value of resistance. Cables with shield are required to be used for minimising interference.

6. Temperature is the only consideration while selecting a diaphragm.
a) True
b) False
Answer: b
Explanation: While selecting a suitable diaphragm for sensing the pressure the following factors are considered important.
• Temperature range
• Shock and vibration
• Frequency response requirements.

4. Capacitance can be varied in ________
a) 10 ways
b) 6 ways
c) 2 ways
d) 4 ways
Answer: d
Explanation: Capacitance is varied in four ways. They are as follows:
Change of distance
Change in dielectric
Change in common plate area
Using quartz diaphragms.

5. Capacitive pressure transducer uses distance of separation for sensing the capacitance.
a) True
b) False
Answer: a
Explanation: A capacitive pressure transducer is based on the principle of distance of separation between the plates of the capacitor. Capacitance of a parallel plate capacitor varies when the distance between the two parallel plates changes.

where, d1, d2 and d3 are the thicknesses
∈1, ∈2 and ∈3 are the permitivitties of the three different media.

9. Microphone converts light into heat.
a) True
b) False
Answer: b
Explanation: A microphone is used to convert the pressure induced in the form of sound waves into electric signal. The electrical signal is then amplified to produce louder sound.

9. Response time for gas-filled phototubes is _______
a) zero
b) intermediate
c) fast
d) slow
Answer: d
Explanation: Gas filled phototubes are generally very slow in response as compared to vacuum phototubes. This is due to the slow movement of ions towards the photocathode.