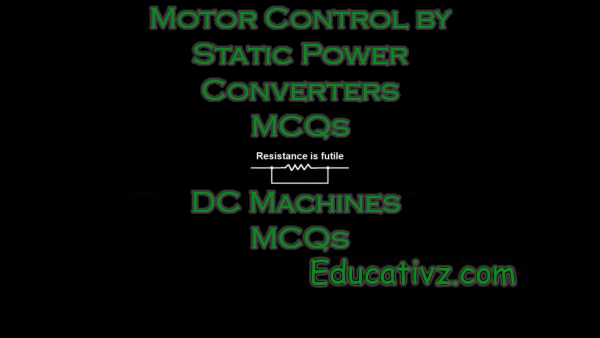 1. Half wave converters are used for controlling DC motor of ________________
a) Below 400 W
b) 400 W – 4000W
c) More than 4000W
d) Anywhere
Answer: a
Explanation: Half wave converter requires a single thyristor and a free-wheeling diode. In half wave converter circuit the motor current will always be discontinuous. Ultimately it results in poor motor performance. This type of converter is employed only for motors below 400W.

2. How many thyristors does we need in half wave converter?
a) 1
b) 2
c) 3
d) Many
Answer: a
Explanation: Only one thyristor is sufficient for the half wave converter purpose, this is employed for small motors only. This thyristor is connected to the single-phase AC supply and with parallel combination of free-wheeling diode with motor armature.

3.Semi-converters can’t be used when regeneration is required.
a) True
b) False
Answer: a
Explanation: According to the one-quadrant converter, it gives voltage and current of one polarity at DC terminals. Therefore, it does not provide support for regenerative braking, i.e. power flow from DC motor to the AC supply.

4. How many thyristors does we need in semi-converter?
a) 1
b) 2
c) 3
d) Many
Answer: b
Explanation: Semi-converter requires two thyristors. Thyristor Th1 is fired at angle of α and Th2 at angle π+α with respect to the supply voltage v and the process is repeated continuously. Circuit also requires two diodes and one free-wheeling diode.

7. How many quadrants does full-converter work?
a) One
b) Half
c) Two
d) Can be any
Answer: c
Explanation: A full-converter is a two-quadrant converter in which the voltage polarity of the output can reverse, but the current remains unidirectional because of the unidirectional thyristors. It requires no free-wheeling diode.

8. How many thyristors are required for full converter?
a) 1
b) 2
c) 3
d) 4
Answer: d
Explanation: Full converter requires 4 thyristors. The only different thing about the full converter is, it does not require free-wheeling diode. A full converter can be used to feed a separately excited DC motor. Each thyristor is fired accordingly.

10. Dual converter operates in _________________
a) 1
b) 2
c) 3
d) 4
Answer: d
Explanation: The dual-converter is the modified one and can operate in all the four quadrants. Its circuit contains two full-converters converting to the DC in either direction. The dual converter provides virtually instantaneous reversal of voltage at DC terminals.

1. Which of the following method is adopted for controlling a DC motor?
a) Resistance control
b) Motor-generator set
c) Inverter Rectifier
d) DC chopper
Answer: d
Explanation: All methods listed above are the methods which can be used to control DC motor, but resistive method makes lots of wastage of energy, while motor-generator set and inverter rectifier set are bulky and costly.

2. Which of the following method is employed when regenerative braking is necessary?
a) DC chopper
b) Variable resistor
c) Inverter rectifier
d) Motor-generator
Answer: a
Explanation: A chopper is essentially an electronic switch that turns on the fixed-voltage DC source for short time intervals and applies source potential to motor terminals in series of pulses. This process controls the average voltage applied to the motor.

3. Which of the following statement is not true regarding to DC chopper?
a) Cheap
b) Fast response
c) Regeneration
d) AC to DC control
Answer: d
Explanation: The chopper provides stepless and efficient control of DC voltage and it is less expensive. It is having another advantage of faster response and regeneration. The chopper is relatively new technology and equivalent to DC-DC transformer.