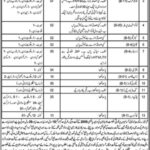 Candidates can download it in image form and reached at time for interview. So read the advertisement carefully which given below.

To apply for this job please visit www.educativz.com.