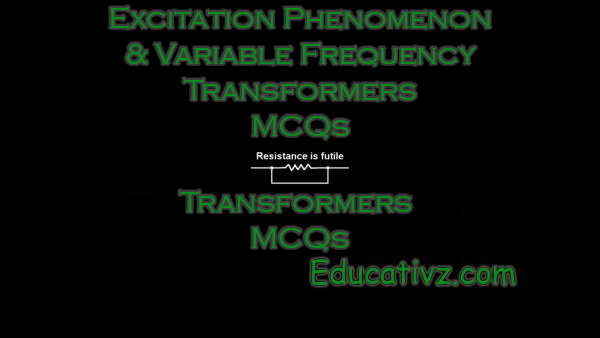 1. No-load current in the transformer is _______
a) Straight DC
b) Steps
c) Sinusoidal
d) Sinusoidal distorted
Answer: d
Explanation: The no-load current in a transformer is non-sinusoidal. The basic cause for this phenomenon, which lies in hysteresis and saturation non-linearities of the core material, will now be investigated; this can only be accomplished graphically.

3. The magnetising current of a transformer is usually small because it has _______
a) Small air gap
b) Large leakage flux
c) Laminated silicon steel core
d) Fewer rotating parts
Answer: a
Explanation: Air Gap increases the reluctance in the magnetic path of magnetic lines of force. When there is an air gap in the magnetic circuit the reluctance is high owing to the permeability of air which is much lower as compared to ferromagnetic materials. The mmf required to overcome that (maintaining flux density in the air gap) is more.

4. Harmonics in transformer result in ___________
a) Increased core losses
b) Increased I2R losses
c) Magnetic interference with communication circuits
d) Increased core losses, Increased I2R losses and magnetic interference
Answer: d
Explanation: harmonics are produced in an particular circuit as a result of magnetization of core material. Thus, magnetic losses are increased that is, iron losses are more so to maintain constant more current will be drawn giving rise to I2 losses.

6. Which of the following is the most likely source of harmonics in a transformer?
a) Poor insulation
b) Overload
c) Loose connections
d) Core saturation
Answer: d
Explanation: Core material used in a transformer is iron, which undergoes saturation when it is excited by some external supply, which causes some unlikely effects like generation of harmonics which leads in losses for a particular transformer.

8. Flux transient goes till the maximum value due to ___________
a) Doubling effect
b) Saturation effect
c) Hysteresis effect
d) Modulation effect
Answer: a
Explanation: A transient flux component (off-set flux) ft = fm originates so that the resultant flux is (ft + fss) which has zero value at the instant of switching. The transient component ft will decay according to the circuit time constant (L/R) which is generally low in a transformer. If the circuit dissipation (core-loss) is assumed negligible, the flux transient will go through a maximum value of 2fm.

11. It is possible to reduce harmonic currents completely.
a) True
b) False
Answer: b
Explanation: It is not possible to prevent harmonic currents completely. But they can be prevented from flowing through the main system by providing a separate low-impedance path for them. This is done by the use of rated series tuned circuits consisting of a reactor and capacitor, which have equal impedance at a specific harmonic frequency.

2. Auto-transformer makes effective saving on copper and copper losses, when its transformation ratio is
a) Approximately equal to one
b) Less than one
c) Great than one
d) Cannot be found
Answer: a
Explanation: Copper In auto transformer /copper in two-winding transformer = 1- T2/T1. This means that an auto transformer requires the use of lesser quantity of copper given by the ratio of turns. Hence, if the transformation ratio is approximately equal to one, then the copper saving is good and the copper loss is less.

3. Total windings present in a autotransformer are __________
a) 1
b) 2
c) 3
d) 4
Answer: a
Explanation: Autotransformer is the special transformer for which the single winding acts as a primary and secondary both. Thus, by taking the appropriate winding into consideration a variable secondary voltage is obtained.

5. Which of the following is not true regarding the autotransformer compare to two-winding transformer?
a) Lower reactance
b) Lower losses
c) Higher exciting current
d) Better voltage regulation
Answer: c
Explanation: Autotransformer is the advance version of normal transformer. It is having better voltage regulation, higher efficiency due to lower losses, lower reactance and thus it also requires very small exciting current.

11. What are the modes in which power can be transferred in an autotransformer?
a) Conduction
b) Induction
c) Conduction and Induction
d) Cannot be said
Answer: c
Explanation: In two winding transformer there is no electrical connection between primary and secondary. So, the power is transferred through induction. But in auto-transformer there is a common electrical path between primary and secondary. So, power is transferred through both conduction and induction processes.

3. Which of the following is the major requirement for the transformers used for electronic purposes?
a) Perfect DC isolation
b) Maximum efficiency
c) Constant amplitude voltage gain
d) Perfect DC isolation , maximum efficiency and constant voltage gain
Answer: c
Explanation: An important requirement of these transformers is that the amplitude voltage gain (ratio of output/input voltage amplitude) should remain almost constant over the range of frequencies (bandwidth) of the signal.

11. Relative voltage ratio curve for an output transformer is _______________
a) Circular
b) Straight line
c) Bell shaped
d) Irregular curve
Answer: c
Explanation: The complete amplitude and phase response of the transformer (with source) on log frequency scale. At high frequencies, the interturn and other stray capacitances of the transformer windings need to be considered. The capacitance-inductance combination causes parallel resonance effect thus, amplitude peak shows up in the high-frequency region of the frequency response.