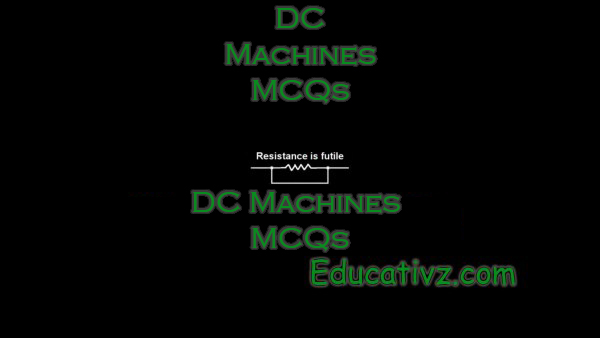 2. What are the materials used for brushes in dc machines?
a) Iron
b) Carbon
c) Aluminum
d) Steel
Answer: b
Explanation: On some extent carbon brush can act as a self-lubricating brush. On moment, polishes the commutator segments. Damage to the commutators is less when copper brushes are used on occurrence of sparkover.

9. If a DC motor is connected to AC supply what will happen then?
a) Not run
b) Burn
c) Run at normal speed
d) Run at extremely low speed
Answer: b
Explanation: If a DC motor is connected to AC supply, an alternating current pass through the brushes and commutator to the armature winding, while it passes through the commutator it is converted into DC so that the group of conductors under successive field poles carry current in same direction. So, the flux per pole will remain constant and not vary. There will be production of heat due to flow of eddy current in field winding and the motor will be burned.

4. Which DC motor is used with flywheel for intermittent light and heavy loads?
a) Series motor
b) Shunt motor
c) Cumulatively compounded motor
d) Differentially compounded motor
Answer: c
Explanation: Cumulative compound DC motor is used with flywheel carrying peaks and so to smooth out the load on the motor as well as to reduce peaks on power system. Without flywheel the motor construction will be much larger.

6. In world today, around 25% of the motors are manufactured are DC motors.
a) True
b) False
Answer: a
Explanation: For a dc machine, of course, the main attraction lies in its flexibility, versatility and ease of control. This explains why in spite of its rather heavy initial investment it still retains its charm in strong competitive industrial applications.

8. Which of the following motor can replace DC series motor?
a) DC shunt motor
b) Cumulative compound motor
c) Wound-rotor induction motor
d) Synchronous motor
Answer: c
Explanation: DE series motor’s closest rival is the wound-rotor induction motor with a rotor resistance control. But ultimately the availability and economics of a dc power is the deciding factor rather than the motor characteristic.

13. Nowadays, DC motor is widely used only in ____________
a) Pumping sets
b) Air compressors
c) Electric traction
d) Machine shops
Answer: c
Explanation: DC machine is used in tractions, because its characteristics suit perfectly with application. Also, its smooth braking capacity and ability to transfer from one mode to other is very good.

14. Which motor is preferred in highly explosive atmosphere?
a) Air motor
b) Shunt motor
c) Series motor
d) Battery operated motor
Answer: a
Explanation: A pneumatic motor (Air motor) is a motor which does mechanical work by expanding compressed air. Air motors generally convert the compressed air energy to mechanical work through either linear or rotary motion, and are preferred in highly explosive atmosphere.

1.The armature in DC machines is always placed on rotor because _______
a) Otherwise commutation will not be possible
b) Otherwise there will not be any induced emf
c) Otherwise current will not flow
d) Can be placed anywhere
Answer: a
Explanation: A DC machine is a heteropolar structure with stationary poles and the rotating armature. The armature winding of a DC machine is placed on the rotor to improve commutation i.e. to convert the alternating voltage produced in the winding into direct voltage at the brushes.

4. Which of the following method is used to connect commutator segments to armature conductors?
a) Brazing
b) Normal wires
c) Insulation pads
d) Copper lugs
Answer: d
Explanation: Commutator in connected to the armature using lugs. Generally, they are made with copper. They are tightly bolted to the armature in order to prevent the centrifugal forces from causing the segments to fly away.

8. In DC generators, current is fed up to the external circuit from armature through _______
a) Commutator
b) Direct wire
c) Slip rings
d) Cannot be determined
Answer: a
Explanation: In any rotary machine current is induced in Sine wave format, according to Faraday’s law. For DC machine commutator provides mechanical rectification so that output is in the unidirectional format.

10. Which conductors are in point of contact with brushes?
a) Lie under south pole
b) Lie under north pole
c) Lie in inter polar region
d) Are farthest from the poles
Answer: c
Explanation: Because of the diamond shape of coils, the brushes which are physically opposite the pole centres are electrically connected to coil-sides lying close to the interpolar region. Thus, electrically the brushes are displaced 90° elect. From the axes of the main poles.

1. In a DC generator the ripples in the direct emf generated can be reduced by________
a) Using conductor of annealed copper
b) Using commutator with large number of segments
c) Using carbon brushes of superior quality
d) Using equalizer rings
Answer: c
Explanation: Brushes carry current to/from rotating parts from/to stationary part. Ripples can be avoided if brushes are maintained. Else, brushes will have some voltage drop in it and we’ll not get simple repeating part in emf.

5. Reason behind the rapid wear of brushes is __________
a) Abrasion from dust
b) Excessive spring pressure
c) Rough commutator bars
d) Abrasion from dust, excessive spring pressure and rough commutator bars
Answer: d
Explanation: Brushes undergo various forces due to their location in a DC machine, they are in contact with rotating and stationary part of the machine. Hence, rough contact between commutator and brushes, inappropriate pressure on brush to rotating part may affect quality of commutation process.

6. For both lap and wave windings, what is the number of commutator bars equal to?
a) Slots
b) Armature conductors
c) Winding elements
d) Poles
Answer: c
Explanation: None

9. What is the range of the brush friction coefficients for medium category?
a) 0.40 and above
b) 0.22 to 0.40
c) 0.11 to 0.22
d) 0.08 to 0.11
Answer: b
Explanation: Brush friction is influenced by many variables including brush temperature, spring force, current, atmospheric conditions, mechanical conditions, ring or commutator materials, surface films, speed and other factors. Brush friction is of medium category when, coefficient of friction lies in between 0.22 to 0.44.

12. DC generators are disconnected/connected from/to the busbars only under the floating condition because ____________
a) To avoid sudden loading of the prime mover
b) To avoid burning of all switch contacts
c) To avoid mechanical jerk to the shaft
d) To avoid sudden loading of the prime mover, burning of all switch contacts and avoid mechanical jerking to the shaft
Answer: d
Explanation: Brushes are the medium between rotating and non-rotating part of the DC machine. If sudden change in connections are done, whole machine undergoes change in all electrical quantities, which may damage machine. Thus, machines are connected and disconnected only at floating condition.

11. If higher terminal voltage is applied to PMDC what will happen?
a) Speed at 0 torque will be reduced
b) Torque at 0 speed will be reduced
c) Torque at 0 speed will be increased
d) Torque will remain constant
Answer: c
Explanation: The straight-line characteristic of PMDC is such that it produces positive intercepts on both axes. If terminal voltage is increased both of these intercepts increases, slope remaining constant. Thus, speed and torque at initial conditions both will increase.