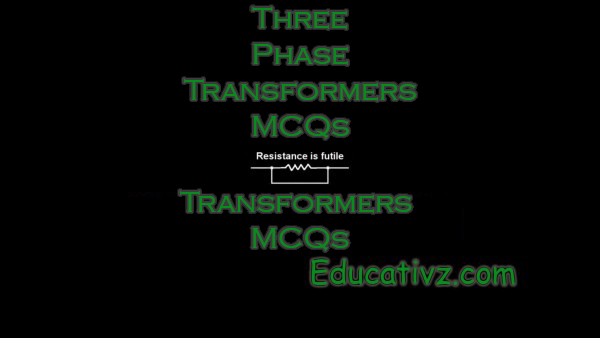 8. Tappings are on _____________
a) LV side of a transformer
b) HV side of transformer
c) Not on any side
d) On both sides
Answer: b
Explanation: Generally, tappings are preferred on HV side, because the HV side is low current-high voltage side, tap changer involves low current interruption and large variations or small steps are possible due to more no of turns.

9. In core type 3-phase transformer flux path chooses how many paths to return?
a) 2
b) Single
c) 3
d) Many
Answer: a
Explanation: Flux of each limb in core type uses the other two limbs for its return path with the three-magnetic flux’s in the core generated by the line voltages differing in time-phase by 120 degrees. Thus, the flux in the core remains nearly sinusoidal, producing a sinusoidal secondary supply voltage.

5. Which can be also called as 00 /1800 connection?
a) Star/star
b) Direct star
c) Delta/star
d) Star/delta
Answer: a
Explanation: Star connection is formed on each side by connecting together phase winding terminals. The voltages of the corresponding phases (and thus of the corresponding lines) are in phase. This is known as the 0°-connection. If the winding terminals on secondary side are reversed, the 180°-connection is obtained.

12. x/√3:1 ratio is obtained in ______________
a) Star/delta
b) Delta/star
c) Delta/delta
d) Star/star
Answer: b
Explanation: The phase transformation ratio is given as x:1, where x simply denotes the turns ratio of a transformer given, thus, in the star/delta connection we will get the 1/√3 factor in ratios, as at a particular point, voltage reading on primary will be proportional to secondary with 1/√3x.

1. For very high voltage transformers which connection is cheaper on primary side?
a) Star
b) Delta
c) Open delta
d) Can be star/ delta/ open delta
Answer: a
Explanation: In star connection with earthed neutral, the maximum voltage of the phase winding to ground is 1/√3 or 58% of the line voltage, while in delta connection this is equal to the line voltage in case of earthing of one of the lines during a fault. Thus, star on HV side is cheaper.

2. In which of the circuit given positive and negative sequence currents will flow in primary?
a) Star/delta
b) Star/star
c) Open delta/delta
d) Delta/delta
Answer: d
Explanation: The only positive and negative sequence currents flow in the lines on the delta side. This could also be achieved by star-connected primary provided the primary and secondary star points are grounded. But this is not recommended on account of flow of ground current for unbalanced secondary loads.

3. When star/star connection is used?
a) Small HV
b) Small LV
c) High HV
d) High LV
Answer: a
Explanation: This case is economical for small HV transformers as it minimizes the turns/phase and winding insulation. A neutral connection is possible. However, the Y /Y connection is rarely used because of difficulties associated with the exciting current.

4. When delta/delta connection is used?
a) Small HV
b) Small LV
c) High HV
d) High LV
Answer: d
Explanation: This suits large LV transformers as it needs more turns/phase of smaller section. A large load unbalance can be tolerated. The absence of a star point may be a disadvantage. This connection can operate at 58% normal rating as open-delta when one of the transformers of the bank is removed for repairs or maintenance.

5. For using as a step-up transformer which connection is used?
a) Star/star
b) Delta/delta
c) Delta/star
d) Star/delta
Answer: c
Explanation: This is the most commonly used connection for power systems. At transmission levels star connection is on the HV side, i.e. D/Y for step-up and Y/D for step-down. The neutral thus available is used for grounding on the HV side.

6. At distribution level transformer with which connection is used?
a) Star/star
b) Delta/delta
c) Delta/star
d) Star/delta
Answer: c
Explanation: At the distribution level the D/Y transformer is used with star on the LV side which allows mixed 3-phase and 1-phase loads, while delta allows the flow of circulating current to compensate for neutral current on the star side.

9. In delta/delta connection flux is almost _________________
a) sinusoidal
b) flat-topped
c) triangular
d) square wave
Answer: a
Explanation: The supply voltage provides only sinusoidal magnetizing current so that core flux is flat-topped; but the third-harmonic emfs induced (cophasal) cause circulating currents in deltas restoring the flux to almost sinusoidal.

13. Voltage at the neutral point oscillates at frequency of 2ω, this phenomenon is called as _________
a) oscillating neutral
b) doubling voltage
c) doubling current
d) doubling neutral
Answer: a
Explanation: Voltage of the neutral point oscillates at frequency 2 ω, phenomenon is known as oscillating neutral and is highly undesirable because of which the star/star connection with isolated neutrals is not used in practice. If the neutrals are connected, it effectively separates the three transformers. Third-harmonic currents can now flow via the neutrals.

3. To reduce effect of 5th harmonic current ____________
a) separate path must be provided
b) no need of separate path
c) add a resistor in series
d) add a resistor in parallel
Answer: a
Explanation: To reduce the strong fifth harmonic in the magnetizing current for the star/star connection with isolated neutral, a path must be provided through iron for the third-harmonic flux. Hence, the use of a 5-limb core is adopted.

7. Where the auxiliary transformers are connected in back to back test of 3-phase transformer?
a) Primaries
b) Secondaries
c) In the middle
d) Can be connected to primaries or secondaries as well
Answer: d
Explanation: The auxiliary transformer for circulating full-load current is included in the circuit of the two secondaries; it could also be included in the circuit of the primaries. Thus, with only losses (core-loss and copper-loss) supplied from the mains, a “heat run” test could be conducted on the transformers.

9. If one of the transformers is removed from the bank of only delta-delta, then it will behave as power delivery transformer of ________
a) 58%
b) 78%
c) 45%
d) 100%
Answer: a
Explanation: It is true as the circuit will still be closed and the transformer will operate will lesser operating point. This new circuit so formed is also called as open delta circuit, which will deliver 58% of output.